Sneak Preview and THANK YOU!!!!

We've reached 1000 fans on Facebook, and as promised- the party has started!  This week's gift with purchase is a Full Sized Tube of Dancing Shoes Amplifying Lip Glaze, and we're doing a special sneak peek at the Fall collection.

I've added two new colors to the site in the sneak preview section- nice shimmering neutrals that you can use everyday, or tuck them away for a special occasion.  The Fall collection will have colors- it's not just a bunch of neutrals- we've been playing with different colors, and textures, and even have some all new pigments that are pretty darn fun.

I don't know when Fall will be ready- I've been up to my eyeballs creating colors like I've never created before, and it's been a process.

The winners were notified via email- or if I couldn't find your email address I did send the notification through a friend request.

And in other super cool news Phyrra chose us for this month's Indie Spotlight on her blog.  It was cool to be interviewed by her, and there is a contest to go with the spotlight this month!  You can enter the contest here:
http://www.phyrra.net/2011/08/silk-naturals-giveaway-2.html

Anywho- Congrats to the winners- and THANK YOU!!!!!!!!!  Happy Happy Happy day :)
Posted by Silk Naturals Mineral Makeup at 9:04 AM No comments:

Apparently the thingamob in the doohickey went kablooey, and then the switch that turns on the backup power failed too.  There are folks on site working on fixing it, but there isn't really an ETA at the moment.

As anyone who's been married for more than about 10 minutes knows- when something is broken, yelling, or asking a lot of questions doesn't really help- and never ever speeds the process.  So, hopefully it will get fixed in a jiffy, and we'll be back online.

We actually have a pretty stellar hosting company- we chose them because they had THE BEST server uptimes in the business.  Yeah.

Onto more fun things- it's high time I tell you what we've been up to!  We were closed/on vacation for a large portion of July.  My husband and I went to France to visit his Mother who lives in Provence.  We made it there during the lavender harvest, and OMG.  If visiting Provence during lavender harvest isn't on your bucket list- you might want to think about adding it.

The scent is heavenly.  Of course, I picked up some more French lavender essential oil for our French lavender lotion, and toured yet another distilling facility.  The place where I purchased it this time does small batch distilling, and I think it does make a difference.

Normally lavender is harvested, and baled in giant 1000 pound bails, and then they put a couple of those in the still, and in a few hours they have a few gallons of essential oil.  The farm that I purchased from is a much smaller operation.  When I asked them about getting a 500 ml bottle- they firmly said no because they just don't produce enough to start putting it in big bottles.

I bought 3 smaller bottles.  It's heavenly.  I apologize for the poor pic quality- the weather was a little rainy, and the fields are absolutely FULL of bees doing their thing.  We took the pics as fast as we could so we didn't get stung! 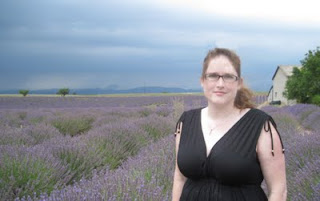 Other than that we mainly stayed around my MIL's house- she banged up her leg pretty badly, and we just sat around, drank wine and enjoyed each other's company.  It was just what the doctor ordered- for all of us.

Shall we discuss the past few GWP's??  It's something I keep meaning to blog about, and by the time I get around to it half the time I've forgotten.

Luau was inspired by Susan.  She came back into the lab one Wednesday before I left for vacation, and said the Whiskey Tango girls needed a mermaid inspired color for a piece they were performing over the weekend.  Luau is what resulted.  When you fly into Niece the thing that always strikes me is the absolute crystal blue of the water.  It looks like a lagoon, and signals to me that I'm really far from home, and vacation has started.  Luau draws from that color, and I twisted it up with a few other things to keep it interesting.

I fell in love with Luau, and wanted a color to match it- so I created Duct Tape.  Duct Tape was designed to match pretty much everything.  There's grey, silver, gold, and a bit of blue.  It really does pick up most tones beautifully.  I wore it as an inner lid color for a good portion of vacation and was really pleasantly surprised by how well it went with so many different colors.

While I was away we stopped at a farm stand and got some fresh figs.  We don't really get them much around here, and the color scheme really blew me away.  The outer part is a deep almost black plum color, and the inside is a creamy purple coral, graduating into cream.  It's beautiful.

So, when I got back I put all of those colors in the blender, and out popped Eden.  How could I name it anything other than Eden when it's based on a fig??

I've also been busy at work...making some of the products that need to get back on the site.  Maiden has been reformulated,and as soon as I can get to the site I'll put it back- along with the microdermabrasion gel.

We actually had to reformulate a fairly large number of lippies this Spring when a supplier discontinued a LOT of the pigments that we relied on for lippies.  The line was descimated, but I did manage to round-up a few replacements,and completed the reformulations.  It was really about half of our lippies that needed reformulated, and it was not a pleasant process.  It's done, and in the past now though- thankfully.  It was actually kind of neat to reevaluate everything, tear it apart and build it back up again.  Not that I ever want to do that again.

Bubble Gum, and Honeysuckle were casulaties of the great pigment discontinuation of 2011- they were completely made up of discontinued colors, and I couldn't get even a reasonable match.  I tried and tried, but Honeysuckle in particular had a certain pigment where there was just no close replacement at all.

It's ok- we'll rebound.  Oranges are big for Fall- and we'll have something great in it's place (I hope).

I hope you all are having an amazing Summer! I apologize for the inconvenience with the site being down.  It's rather annoying for everyone, and hopefully it will be fixed soon!

Thank you all again for being you- you really brighten our days.