Funny story....I was doing my makeup one morning, and frogged it all up.  I was doing an experiment with colors, and it just didn't turn out well AT ALL.  Too deep, too shimmery, and just not really what I was going for.

Well, if you want to make an omelette you gotta break a few eggs (or marry a guy who makes great omlettes).  Normally I'd just clean it off and do something else, but we had to leave NOW.

In desperation I grabbed my foundation, and started patting it on top of the hot mess I'd created.   The foundation muted the color, took away some of the sparkle, and made it PRETTY.

So I experimented that night- with the deliciously unholy combination of Rollick and Superfly.  With a little foundation it was lovely. 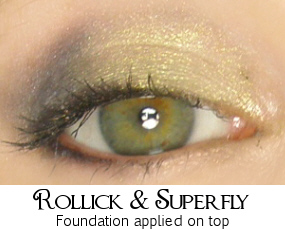 Moving on to a little more "normal" combo- I went with Scout & Bling.  It's a great combo, but a little over the top for daytime.  Bling in particular looks like gold foil applied to your lids, and it's super fun for a night out.  I love it with a lot of black liner as sort of a Middle-Eastern/ Bollywood inspired look.

Safe for work depends on where you work- so I generally think of safe for church, and err on the side of being conservative.  I think this would work in just about any office.

So far, this technique has worked with every combo I've tried it with.  I like the muted, more neutral look for day, and it's really expanded options for color selections.  It doesn't really work all that well with super glittery shades, but it's a fun technique to play with.

To test the theory, you could try it at night when you're about to take off your makeup.  That's usually my play time to practice new looks- right after I've washed my face for the day.

The Fall Collection is live!!!  It’s also pretty darn large.  Usually when I make a collection I just kind of keep going until I run out of “mojo”- and the mojo held out for three straight weeks.  So there are colors, and colors and colors!
I spent a lot of time looking at the clouds this Summer- and I love the way they’re kind of lit from within.  So, I set to work to replicate that.  It took me weeks.  I played, I tested, I nuanced, tweaked, and experimented.
And I came up with a new texture that we’re calling Eyelights.  You have to wear them over a primer- preferably Stick ‘em because they look best when they’re a little bit damp, and Stick ‘em keeps them a little bit wet.  Rather than a sheen or a pearl they sort of glow from within.  There’s a subtle heat and luminosity to them.  There are also a few without interference colors that are modeled after Blanket Fort- that lovely soft focus pearl finish. 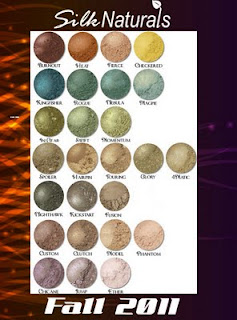 They’re going to look a little bit different on each of you- and they’re going to look a lot different than when you just swatch them on your arm.  There’s a luminosity to them that is nearly impossible to capture in just a few pictures.
They’re going to be different on different days, in different lights, on different people.
The inspiration came from two sources- our vacation, and the Finger Lakes where we live.
We ventured into Van Gogh country near Arles on this vacation- and what really blew me away about his paintings is the texture.  The paint is built up- layer upon layer of brush strokes to get the shadows, and the light just right.  Starry Night is cool on a poster, but in person- it takes your breath away.
Texture, texture, and more texture.  Color is what it is- it’s the way color sits on the canvas that’s transformational.  When we got back to Upstate NY it was right in the middle of racing season.  I grew up in Watkins Glen New York.  It’s a sleepy little Podunk town in the middle of nowhere- about 20 minutes from Trumansburg.
There’s a HUGE race track up on the hill, and there’s a race almost every weekend.  The Vintage Grand Prix, NASCAR, and every once in a while a little Formula 1.
There’s just something about the throaty rumble of a performance tuned engine that gets my blood going.  Standing near the track when they’re going full throttle just shakes every cell in your body in a way that you can’t describe to a person who's never experienced it.
So I combined the two influences- the beautiful light of Provence with life in the fast lane.  It’s a big nod to you.  I know you’re beyond busy, and I like that your makeup time is your little bit of “me” time- to play, to relax, to enjoy being you.  The colors are complex so you can play fearlessly without worrying about being late to work, or just keep it simple because the colors are already complex enough.
There are also nine- yes- nine new Amplifying Lip Glazes, a new Buttercream, and a new Kisser Slicker.  We’ve also added Vegan Illuminating Powder, Pink color booster, and a new lip stain.   Gigi makes her triumphant day-glo return to the site as well! 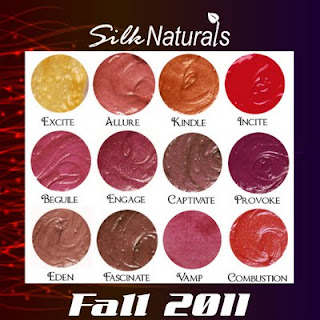 We all want the collections to be bigger than they are, but there has to be deliberateness to the colors- and stability testing when it comes to dyes.
There is no skincare in this release because the colors came pretty fast and furious this time, and it was all I could do to keep up with the ideas while I still had the mojo going.  I’m actually working on a few projects, and hope to have some things to the site in another month or so.
In the meantime- HAVE FUN with the new collection!!!!!  It’s big, colorful, and juicy.  I hope you love it!!
Thank you all for your awesome suggestions, and all of the input you have on the forum.  I listen and it helps more than you’ll ever know.
Enjoy!!!!
Posted by Silk Naturals Mineral Makeup at 1:06 PM 4 comments: